Do you hurt all over, frequently feel exhausted, can’t seem to ever feel “rested” after a night’s sleep, don’t respond to any of the recommended medications from your family physician, and no test seems to uncover anything specific? If this sounds like you, it is possible that you are suffering from fibromyalgia (FM). FM is a chronic/long-term condition including generalized pain in the muscles and joints, usually on both sides of the body above and below the waist, with associated “tender points” where moderate to firm pressure causes pain classically in the following locations (but anywhere is possible): 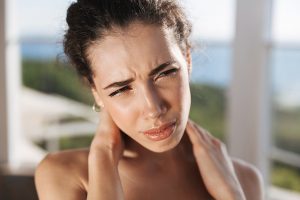 In fact, a generalized hypersensitivity is common and it seems like you just can’t turn off your brain. It can begin with a physical or an emotional event but doesn’t have to, as it can also seem to come out of nowhere. In the United States, about 2% of the population, mostly women and especially with increasing age, are affected by FM.  The statistics are similar in the UK. One common underlying clinical finding is non-restoring sleep with frequent interruptions during the night. Sleep disorders that are associated with FM include restless leg syndrome and sleep apnea.

One study including 168 FM patients associated fibromyalgia with a disturbance in the central nervous system (CNS). Researcher performed various tests, including an auditory brainstem response (ABR) which tests the cranial nerve that is responsible for our hearing and balance; a test that measures for eye movements primarily when sleeping; and a third test that measures balance functions. The following is a list of the results from the study:

Fibromyalgia and Vitamins – What’s the Connection… Fibromyagia is a debilitating disease that affects millions of English and Americans, with most sufferers being female. Research has explored a lot of different possibilities, but fibromyalgia remains a poorly understood disorder with no known single cause. Fibromyalgia can be more thought of as a global disease with likely many different factors coming tog…