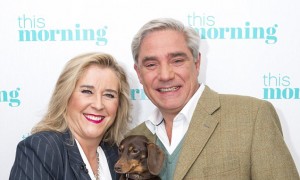 I must admit that of all the couples on Gogglebox Stephanie and Dominic are by far and away the most entertaining.

Hard-drinking Gogglebox couple Stephanie and Dominic Parker have revealed a more serious side to their life by speaking about their disabled son.

The pair, who have become firm public favourites on the hit Channel 4 show due to their outspoken views have spoken about their son Max, now 15, who can have 150 epileptic seizures a month.

They noticed that there was something wrong with their eldest, when he was just four months’ old.

Stephanie and Dominic Parker, pictured, the ‘posh ones’ on Channel Four’s Gogglebox have spoken about their disabled son for the first time, who has on a bad month some 150 epileptic seizures and has autism

The couple, pictured, are known for their outrageous views and posh accents on the hit TV show

Steph told Deborah Ross in the Times Magazine that they noticed Max had these ‘little jerky movements’.

She said: ‘We took a video of him and showed it to the GP, who immediately referred us to the paediatric consultant at the local hospital who said, “I think we have a problem and I need you to come in first thing Monday morning. Bring a bag”.’

The youngster also has autism and spends term time in a special residential school.

Steph said that Max’s condition has had a profound effect on their lives and has made them better people, even though they do try to enjoy themselves.

Steph and Dom have won a cult following for being plummy, outspoken and never without a drink on the Channel 4 show, in which the reactions of families are filmed as they watch TV together in their homes.