Earlier this month I spent quite a bit of time at the London Film Festival as a press delegate.  One thing was very apparent this year was the importance given to films that dealt with disability issues.  The opening night gala was Andy Serkis’s film Breathe with Claire Foy and Andrew Garfield.  Breathe told the true story of the successful and dashing Robin Cavendish who has just married Claire Foy and they are expecting their first child when he is struck down by Polio on a business trip to Kenya.  This was in the 50s when polio epidemics were regular occurrences and medical science had very little to offer.  Indeed, all they wanted to offer Robin was a life in a hospital ward with a respirator by his bed.  Fortunately his wife Diana who is a forceful and strong-willed woman and persuades her friend Teddy (Hugh Bonneville)who is an Oxford professor to design a wheelchair with a built in respirator so that Andy can get out from hospital and move around.

Defying the odds and medical opinion, Robin goes on to live a long and full life moving around on steadily improving versions of his wheelchair which is gradually implemented across the NHS.    Seeing this film reminded me of the exhibition the Queen Elizabeth Foundation did last year which features Iron Lungs from the 1950’s.  We really have moved on, haven’t we? 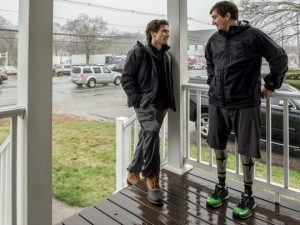 The second film that caught my attention was ‘Stronger’ another true story, this time concerning Jeff Baumer a regular guy living in Boston who is severely injured when the Boston Marathon was targeted by terrorists.  Baumer loses both his legs whilst he was cheering on his girlfriend from the finishing line.  The film depicts how he deals with aftermath of the tragedy and gradually adapts to walking again on prosthetics whilst being hailed as a symbol of a ‘stronger’ Boston spirit.

The film Breathe is on release now and, if you like Claire Foy in ‘The Crown’ you will find her performance equally compelling in this movie.